The demolition of Westmorland House will start tomorrow, Wednesday 20 November. 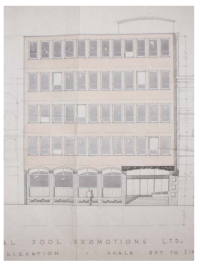 The six storey concrete monolith of Westmorland House was built in 1966 as headquarters for Regional Pools Promotions. But its heyday was short-lived and by 1982 Regional Pools had moved away leaving the building empty. 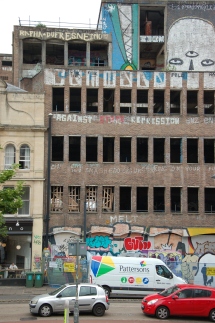 Later in the 1980s the site was bought by Opec Prime, a property development company owned by the London based Comer brothers. Various planning applications were submitted over the years but these were either rejected as over-intensive or the schemes never came to fruition. In the meantime the site became a canvas for street artists, home to a group of travellers and, more tragically, the site of a number of fatalities.

The City Council recognised the blighting effect the building was having on St Pauls and Stokes Croft and undertook to use compulsory purchase powers to buy the site but attempts in the mid 2000s were sabotaged by the financial crisis. Efforts restarted in 2011 when CAG was formed and a community vision agreed. Opec Prime then brought in Fifth Capital to secure a new planning permission and in 2017 the site was sold to the Bristol based PG Group. 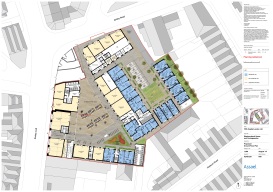 The redevelopment of the site will see the conservation and reuse of the neighbouring listed Carriageworks building and the demolition of Westmorland House ready for  replacement by new flats with commercial space on the ground floor and a public square.

Stuart Gaiger, Development Director at the PG Group, said “There has been a considerable amount of preliminary ground work to be done since we acquired this site in November to provide 112 homes and twelve business units but now our contractors are poised to begin the actual demolition. We want to deliver an enterprising development that respects and reflects the community ethos and the independent spirit that flourishes around the area”.

The Chair of CAG, Lori Streich, said the group had been working since 2011 to ensure the inspirational regeneration of the site in line with the community vision. “We are delighted that PG are now starting the demolition of Westmorland House which is a huge step in the history of the site,” she said.

The redevelopment is due to be completed by the autumn of 2021.