Analysis of the values put on their flats compared to local comparables show that Fifth Capital may have seriously over valued their scheme, to the point that it is not viable.

In their Viability Report, Fifth Capital follow standard procedure by calculating  the value of their flats by comparing them with others on the local market; ‘comparable valuation’. But just how comparable to Stokes Croft are these properties?  (Note that Fifth Capital’s one bed flats will be 500-600 sq ft)

Dockside development on the old Courage brewery site. “The height of contemporary living” with “views overlooking the Floating Harbour and Castle Park”. 1 bed flats for c.£175,000 – £225,000. 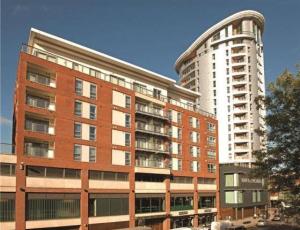 “The location of these new apartments in Bristol is as stunning as the building, facing the Millennium Promenade and overlooking the Floating Harbour and Porto Quay.” 1 bed apartments for £160,000 to £190,000.

The Viability Report accepts that all of these are far superior to the Carriageworks site. So they also consider some properties in the local area for better comparables. Of those, five are one bed flats. 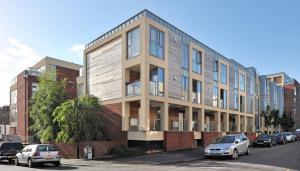 The other three one bed flats listed are up in Kingsdown or Cotham where you obviously get a bit of a premium over grungy living at bottom of hill.

The Council’s assessment of the viability appraisal

As is normal practice the Council asked their own consultants, in this case BNP Parisbas, to assess the validity of the viability appraisal.  They thought that the best comparable is other new build (the newness, the hype of a new development and the substantial marketing budget will always give a boost to values). Consequently they could expect Armidale Place to have lower values than a new build.  They only found one comparable new build.

“Prospect Court is a stylish purpose built development of just nine, 2 and 3 bedroom, apartments arranged over three floors designed to blend with the existing period properties. Located in a prime elevated position”.  There are no one bed flats but two beds (c720 sq ft) have sold for c.£245,000 (Fifth Capital’s are being valued at £250,000).  But this is a small quite exclusive development and, as the sales blurb says, it’s up the hill!

So, in light of the comparable evidence, it is a bit surprising that Fifth Capital conclude (and BNP Parisbas confirm) that their one bed flats will be worth £215,000 (students of Estate Management and Valuation would probably be marked down for failing to take proper account of the comparables!).

If the value was put at £150,000 (still outrageous, but there you are) it would result in a reduction in the total sale values of the 59 one bed flats of £3.8m.  A similar reduction for the two and three bed units (we haven’t the time to do that analysis but we’d guess they may also be over valued) would wipe out all profit on the scheme and, we suspect, make it a non-starter.  That doesn’t help a case for more affordable housing, but it does suggest that something else is going on in the figures that is not fully disclosed in the viability report.