Influential leaders in the creative, built environment and public sectors have sent an open letter to Bristol City Council calling on it to reject the planning application by Fifth Capital London to redevelop the Carriageworks and Westmoreland House.

In their letter the signatories note that the local community had been working with Council and Knighstone Housing Association to bring forward the redevelopment of the site. Last year, however, a developer, Fifth Capital London, had submitted their own planning application. The letter says that the new proposals have many shortcomings, not least the lack of any social housing. It concludes:

“In this year as Green Capital and as a city built on its youthful and adventurous spirit, we believe Stokes Croft and Bristol deserve better. We call upon Bristol City Council to do everything in its powers to ensure that the future of the Carriageworks and Westmoreland House site meets local and citywide needs and the aspirations set out in the Community Vision. In so doing we ask the City Council to reject the proposals currently set out by Fifth Capital London.”

Lori Streich, Chair of the Carriageworks Action Group, said “We welcome this letter. Everyone wants a development that addresses the long term dereliction. But Bristol has pressing needs especially for affordable housing. These must be addressed along with the need to genuinely engage with the local community and enhance the creative and innovative spirit of the area. Winston Churchill once said “We shape our buildings, and then our buildings shape us”. We need to ensure that this building reflects the community that we want to become.” 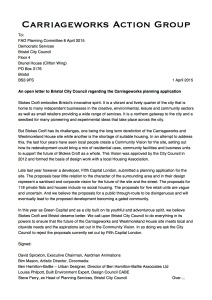